Phaedra Ellis-Lamkins, Co-Founder and CEO
It started when Robert Taylor ran a red light in 2014. Mr. Taylor was unable to pay the ticket, and his driver’s license was suspended for non-payment. This threw him into a multi-year cycle of license suspensions, jail stays, and $4,000 in court debt. As a result, Mr. Taylor lost his job and struggled to find new employment.

Mr. Taylor is one of approximately seven million Americans who have had their driver’s license suspended for unpaid tickets and court fines, but this issue has only recently garnered widespread attention. In 2015, the Department of Justice released their investigation into the municipal court’s predatory fines and fees in Ferguson, MO. It sparked a national conversation.

Promise, a California-based software company, is now entering that conversation with a solution. Phaedra Ellis-Lamkins, Promise’s co-founder and CEO, is a renowned American social justice advocate. Guided by her extensive experience working closely with government and low-income communities, Promise launched a ticket payment app, PromisePay. The app is designed to keep low-income residents from losing their driver’s licenses and suffering other consequences associated with unpaid tickets. The app also allows residents to pay tickets immediately with multiple payment options such as Venmo, PayPal, credit cards, and cash.

PromisePay was born from years spent working closely with public safety agencies. Ellis-Lamkins explains, “Promise focuses on finding better, community-oriented alternatives to incarceration.” They started by building software to reduce recidivism and help criminal justice agencies understand how effective their programs are. From their work with pretrial and probation departments, Promise’s team learned firsthand how many people were incarcerated for unpaid tickets.

They saw the opportunity to help millions of people as well as increase revenue for local government, and created PromisePay.

Promise is dedicated to making a meaningful impact on America’s criminal justice system. In addition to PromisePay, Promise has also built multiple software tools to help people in community supervision programs successfully make their way through the criminal justice system. Their mobile-friendly services remind people of critical appointments like court dates via SMS, show people a high-level overview of their obligations in a mobile app, and enable two-way chat with their case managers. In one county, Promise’s pretrial product suite led to a 21 percent increase in client appearance at court dates.

According to Ellis-Lamkins, Promise’s secret sauce is their ability to quickly integrate with an agency’s existing systems. Promise’s world-class software engineers work with customers to combine data from multiple sources together in a single interface. The single source of truth reduces duplicate effort and helps agencies identify missing or incorrect data. Finally, being able to get a holistic, combined system with little work has made working with Promise a standout experience for their customers.

On a recent project, Promise guided a customer through complete digitalization of their manual, ad-hoc case management practices. The paper-based system was painful and inefficient, and prevented the agency from running an effective community supervision program. By employing Promise’s solutions, the customer eliminated their manual operations, optimized their workflows, increased the number of clients they can serve, and now have a clear picture of their client population.

“We believe that good can come out of partnering with government to build technology that lowers recidivism rates and supports people’s long-term success and wellbeing,” says Ellis-Lamkins. To deliver on their ambitious vision, Promise partners with government agencies and non-profit organizations across the country. “At the end of the day, our aim is to put people first,” says Ellis-Lamkins. 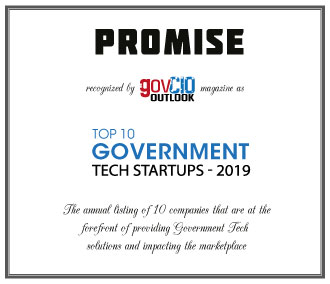